Mr. Charles Cutting has retired as a Councillor from Ripley Town Council after 39 years representing the Elms Ward of the town.
To commemorate this outstanding length of service, Ripley Town Council have granted Charles the highest honour we can bestow to him with the Honorary Freedom of the Town, for the valuable and devoted services rendered to this council and to the Ripley Township.
Charles was elected to represent his ward in 1982 and has been a respected member of the council throughout the years. Charles’ priorities for the town included the provisions for young people in the town and he was a valuable member of the Events Committee.
Charles was the Mayor of Ripley in 1988 and then again in 2006. He was consort to his late wife, Jenny when she was Mayor of Ripley in 1989 and in 1993.
Charles has lived in Ripley all of his life, except for when he was in the Royal Navy. He attended St. John’s School between the years of 1935 and 1944 when it was situated on Derby Road in Ripley.
In 1948, Charles served in the Royal Navy under King George VI and with Admiral Mountbatten. He left the Navy after seven years of service.
Charles had an extensive political career as a Councillor. He was a Derbyshire County Councillor for 20 years, of which two years were spent as Chairman. He was an Amber Valley Borough Councillor for 18 years (1986-2004).
Charles enjoys listening to brass bands and has always been in the front row of the Ripley Bands on the Park during the summer months.
Upon receiving his certificate and medal from the Mayor of Ripley, Councillor Tony Holmes, Charles said, ‘It is a wonderful honour to have received this award - the first of its kind in Ripley. I am immensely proud and have enjoyed every minute of serving my community. I have stepped down from the Council having made many friends over the years and I wish them all well.’
Ripley Town Council are eternally grateful to Charles for volunteering almost four decades for our community. 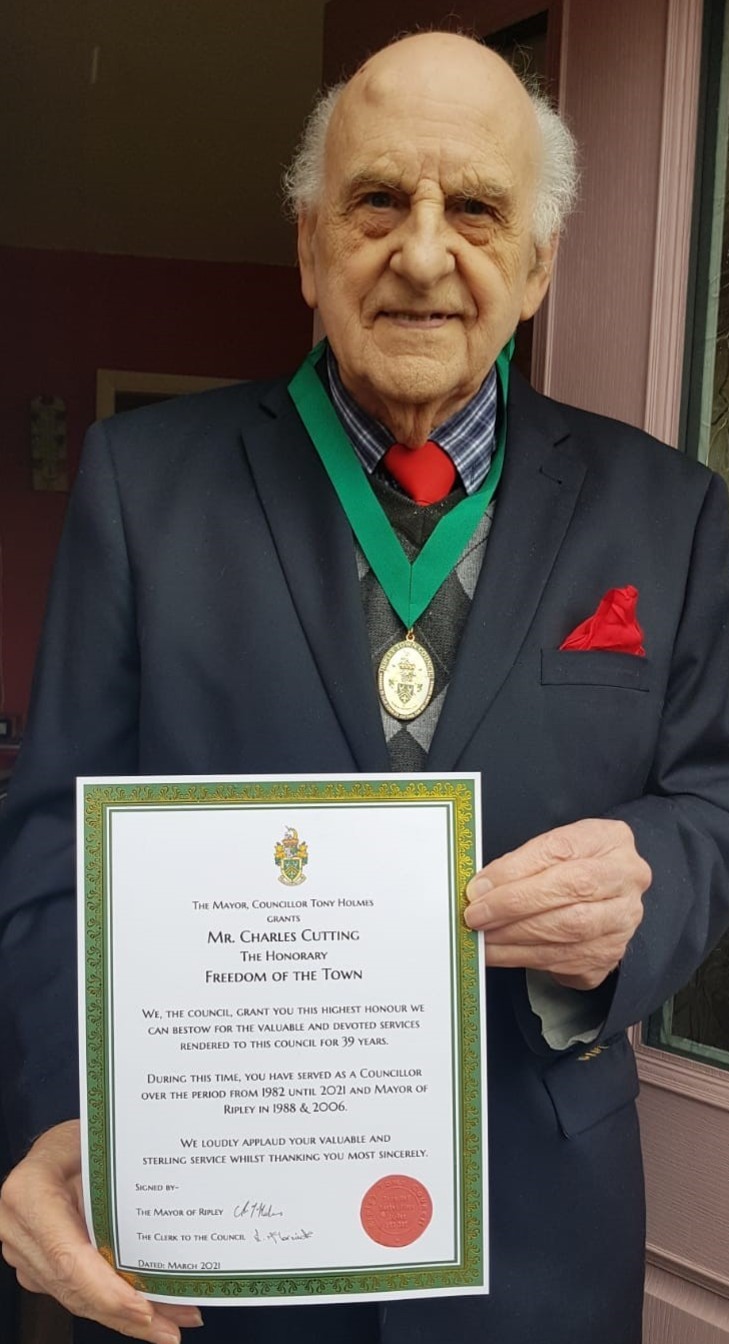